Elcon-Mamab Control Instruments is a company dealing in the design, production and sale of control and measurement devices for the Israeli industry. Since its founding, the company has been an outstanding pioneer in the use of latest technologies in its products.

Thanks to our new partner we will be present at the 25th International Exhibition RAX, devoted to electrical engineering, control, automation, instrumentation, pneumatics, lighting systems, energy and energy efficiency.

The fair will be held on May 15-17 at the Tel Aviv Fairgrounds.

An example of the practical use of the Nano RFID module

Here is an example of the practical use of the capabilities of the Nano RFID module proposed by ROBOTIZE, specializing in the design and implementation of complex solutions for the industry. Developed by experts from Robotize login system in the technological process allows in a very simple way to manage access, for example to the production line.

More about our partner’s projects  www.robotize.pl

The above video material is the property of Robotize.pl

Nano series of modules joined by another: Nano RFID

This is the first of this type of module on the market that allows to read RFID transponders via the LAN. The device has been designed for Clients who want to use it to work with their own software.

The module supports protocols HTTP  server mode, HTTP client mode, Modbus TCP, SNMP. It has a built-in web server and the function of messaging TRAP. It has possibility to update the software, the latest version is always available on our website. 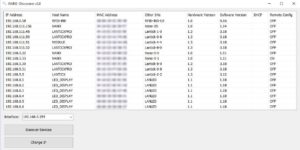 Known to our Customers Discoverer, that searches for network-connected devices of our production, has been enhanced with new features. Until now it was possible to read following parameters: IP Address, Host Name, MAC Address, Other Info, Hardware version, Software version. In the updated version added the ability to quickly move to the the selected device and to sort data by any parameter by clicking on chosen column.

The program can be downloaded here

The new version of the configuration software of RFID

The new version of the configuration software of RFID

In the new software has been added additional code formats.

As we know, the standard card unique sends five bytes of code card. Depending on the selected output format set in the configuration program we get:

Binary – sequence of five bytes received directly from the card. This format is used almost exclusively in the mode: virtual COM port

HEX UpperCase Letter Minus – received code is converted to hexadecimal system (hexadecimal) with large letters and also between bytes is introduced character “-” for example: 1A-2B-3C-4D-5E.

Some applications require data input in decimal format. In this case, selecting:

Go to the store: RFID-USB-DESK Reader